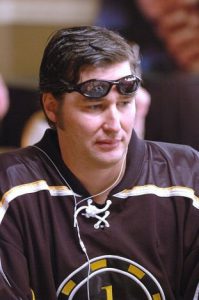 In real life Phil Hellmuth is considered a great texas holdem tournament player, but definitely not the best poker player allround. He is best known for winning 11 World Series of Poker bracelets all in Texas Hold'em events and winning the Main Event of the WSOP back in 1989 when he was only 24 years old (at the time the youngest person to ever win the Main Event) and beat two time champion Johny Chan. Currently the record for youngest main event winner is held by 2009 World Champion Joe Cada, who was 21 years old.

Phil Hellmuth’s 11th record breaking bracelet came in 2007, when he won a $1,500 {1133,No Limit poker event}. Besides holding the record of winning the most bracelets at the WSOP, he also holds the record for most WSOP cashes at 79 and the most WSOP final tables, with 42 appearances.

After breaking so many WSOP records, Phil Hellmuth got inducted into the Hall of Fame in 2007 and has amounted over $11.4 million dollars in his poker tournament career. This puts him in 4th place on the all time money rankings just behind Jamie Gold (2006 World Champion).

Phil Hellmuth has gained a lot of fame thanks to his regular appearances on episodes of popular poker TV shows like Poker After Dark, NBC’s National Heads-up Poker Championship and GSN’s High Stakes Poker show. Hellmuth was the first person to win the National Heads-Up Championship back in 2005. Unfortunately he hasn’t been so successful during his televised cash game sessions on other shows, which have often resulted in extreme(ly funny) blow ups.

These televised blow ups have all found their way to YouTube and have further more cemented his legacy as the official Brat of Poker. A simple YouTube search should be enough to give you a good idea of what these blow ups look like. The first video that came up when we searched had the following title ‘Phil Hellmuth needs to calm the F*** down.’

If you don’t feel like searching for poker player Phil Hellmuth on YouTube, you can start with this video of one of his epic blow ups during the WSOP 2008. It should give you a good idea why he is called the Poker Brat or you could check out our review of Helmuth's blog to get an idea what Hellmuth likes to write about. Hellmuth’s latest tweets are displayed below the next movie: