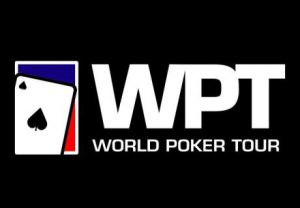 The World Poker Tour (WPT) is a televised series of poker tournaments organized around the world, although the biggest part of the tournaments are hosted in the USA. Many of the biggest names in the game compete in these tournaments which are aired later on television internationally.

The WPT TV show was created by television producer Steven Lipscomb and aired on the Travel Channel for the first time back in 2003. They continued broadcasting the show up until the fifth season, when in 2007 the WPT organization announced that the show would move to the GSN network (GSN also airs one of our favorite poker TV shows named High Stakes Poker).

Not much later the World Poker Tour organization announced that the 7th season of the tour would be broadcasted on the Fox Sports Network.

The commentary for the TV show is provided by professional poker player Mike Sexton and actor Vince Van Patten, who have since commentated on every single show and gained a lot fame thanks to the many broadcasts of the TV show globally.

Ofcourse no Poker TV show is complete without some kind of smoking hot Hostess. So let’s give you a round up of all the ‘babes‘ who have gracefully hosted the World Poker Tour TV show over the years.

First up was Shana Hiatt, who hosted the first 3 seasons of the show and interviewed all the poker pro's from the sidelines. She was followed up by Courtney Friel who took over the role of host for season four and later by Sabina Gadecki who did season 5. In season 6 the cute duo Layla Keyleigh and Kimberly Lansing were responsible for hosting the show and finally player and reporter Amanda Leatherman became hostess and sidelines reporter for season 7.

The WPT organisation tried to create another tour/tv show named The Professional Poker Tour (PPT), but unfortunately after only 1 season the project stranded, as they couldn’t find a network that would air the second season for them.

Eventually the World Poker Tour got bought up by PartyGaming for $ 12,300,000 in 2009, who have given the tour the boost it badly needed.

Especially after the – in our opinion – silly decision to hand out bracelets to event champions in 2008 (including all winners prior to that date). It seemed like they wanted to create something similar to a WSOP bracelet, which has a lot more history and prestige in the poker community.