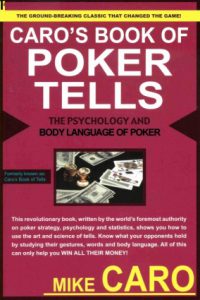 If you have previously searched for some good poker books online, we’re sure you have come across Caro’s Book of Poker Tells, as it is one of the most read poker books of all time. It even appears in the opening scene of Rounders (just like ‘the bible of poker‘ Super System by Doyle Brunson).

Mike Caro has written over 13 books and has become known as ‘the mad genius of poker‘. Many people attend his seminars and his articles and books are widely read.

The Book of Poker Tells begins with an introductory of the content and continues with an explanation of his well known MCU Poker Charts. After the introduction, the content is split up into 4 sections, describing the different kind of states pokerplayers give off tells.

These 4 different sections are titled ‘Tells From Those Who Are Unaware‘, ‘Tells from Actors‘, ‘Some General Tells‘ and ‘The sounds of Tells‘. Each of the tells that are discussed in these categories are accompanied by photographs and text, to illustrate what kind of tell is explained and what the player should be looking for at the poker table (and ofcourse what not to do).

The text gives more information about categorizing the poker tells and explains what they mean and what motivates one’s opponents to give off particular tells. Also included are estimates of the tell’s reliability and the value of the tell’s per hour. To be frank, we don’t believe these reliability and value per hour numbers are accurate at all, especially the onces stating that the tell is 97% reliable.

The book concludes with a summary of all the tells in the book and a quiz to test your knowledge. The quiz is a nice extra feature, which extends the use of the book at bit more.

If you are interested in expanding your knowledge about poker tells and at least occasionally play live poker we can highly recommend this book to you. The reason being that, since this book was written, there are hardly any other books that cover the same material, let alone get as close to the quality of Caro’s Poker Book of Tells.