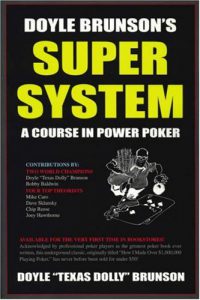 His first poker book, Super System was (and still sort of is) considered to be the bible of poker. During its release, not many other poker books got published, let alone books with high quality poker stategy. Super system has become the single most influential book ever written about poker.

Super System consists of different chapters covering different variations of poker. Each chapter is written by the best poker experts on the matter. Some people have complaints about this and would prefer if the book only covered texas holdem strategy exclusively. Having so many different writers working on the book also means that the quality varies from chapter to chapter.

The no limit holdem chapter written by Doyle Brunson himself is the most popular one. Since its release in the 70’s, it has been considered one of the best pieces ever written on advanced power poker.

In Super System 2 this no limit holdem chapter has hardly been updated or rewritten at all. It’s pretty much a word by word copy of the original text from the original Super System and this is definitely a missed oppurtunity and misleading for consumers.

On a more positive note, they did succesfully implement a chapter specialised in pot limit omaha strategy. Omaha poker has gained much popularity and is the most played poker game online and at casinos after Texas Holdem around the world. Despite the rise in popularity, it is still hard to find good omaha strategy books.

Overal the Super System poker book series written by Doyle Brunson definitely deserves a spot in any serious poker player’s library. It is a 666 page counting piece of poker history, which covers the basic poker strategy for many types of poker games, at a relatively cheap price.