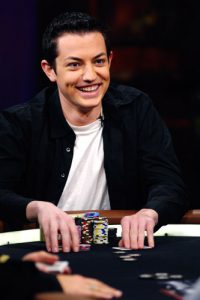 Tom ‘Durrrr’ Dwan, born in 1986 in New Jersey, is one of the biggest internet poker legends of all time. He regularly plays the highest stakes under the nickname Durrrr} versus the best poker players in the world and seems to always come out as the winner in the long run.

Tom Dwan started playing internet poker when he was 17 and got $50 as a birthday present from his father. He began playing $6 sit and go’s, but when his bankroll went down to $15 he decided to give the cashgames a try.

This turned out to be a great success, as Tom Dwan was able to capitalize on his weaker opponents. Eventually he worked himself up through the low and medium stakes up to the highest limits online, ending up at the $500/$ 1,000 No Limit tables (buy-ins for this game are $ 100,000).

These highest stakes on the internet have become Dwan’s bread and butter and he is responsible for many records set on these limits.

Besides being a great cashgame player online, he’s also a great player when it to comes to live poker. Tom Dwan currently holds the record for the biggest televised hand in poker history, with over $1.1 million in the pot.

In January 2009 Tom Durrrr Dwan set out to make a statement to the entire poker community when he issued his $1 million challenge. He basically challenged to play anyone (except Phil ‘OMGClayAikon’ Galfond) heads up in either Texas Holdem or Omaha for 50.000 hands on 4 tables at the same time at limits off $200/$400 or higher.

So far Phil Ivey has said he is willing to accept Durrrr’s million dollar challenge, but Patrik Antonius has beaten him to the punch.

Patrik Antonius and Tom Dwan have officially started the challenge a long time ago and since then have played each other sporadically. Currently the end is finally nearing with the players having played around 40.000 hands headups against each other, with Tom in the lead for about $2 million dollars.

Funnily enough this high stakes poker player has never won a single WSOP bracelet nor a World Poker Tour (WPT) title, but considering his age it’s more than likely one of the two will come eventually.

You can Follow Tom Durrrr Dwan and his crazy poker antics via his official twitter feed displayed here. Tom Dwan also writes his own blog, check out this review of Durrrr's blog