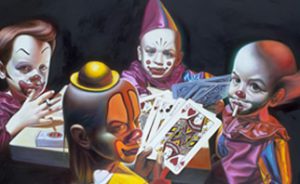 Six guys were playing poker when Smith loses $500 on a single hand, clutches his chest and drops dead at the table. Showing respect for their fallen comrade, the other five complete their playing time standing up.

Roberts looks around and asks, ‘Now, who is going to tell the wife?’

They draw straws. Rippington, who is always a loser, picks the short one.
They tell him to be discreet, be gentle, don’t make a bad situation any worse than it is.

‘Gentlemen! Discreet? I’m the most discreet man you will ever meet. Discretion is my middle name, leave it to me.’

Rippington walks over to the Smith house, knocks on the door, the wife answers, asks what he wants.

She hollers, ‘TELL HIM TO DROP DEAD!’

Joke #5: The rabbi, a minister and a priest.

A rabbi, a minister, and a priest are playing poker when the police came with his dog to raid the game. Addressing the priest, the lead officer asks: ‘Father Murphy, were you gambling?‘

Turning his eyes to heaven, the priest whispers, ‘Lord, forgive me for what I am about to do.‘ To the police officer, he then says, ‘No, officer, I was not gambling.‘

The officer then asks the minister: ‘Pastor Johnson, were you gambling?’

Again, after an appeal to heaven, the minister replies, ‘No, officer, I was not gambling.“

Turning to the rabbi, the officer again asks: ‘Rabbi Goldstein, were you gambling?‘

Shrugging his shoulders, the rabbi replies: ‘With whom?‘

Little Tommy was the quietest boy in school. He never answered any questions but his homework was always quite excellent. If any one said anything to him he would simply nod, or shake his head. The staff thought he was shy and decided to do something to give him confidence.

‘Tommy,‘ said his teacher. ‘I’ve just bet Miss Smith $5 I can get you to say three words. You can have half.‘
Tommy looked at her pityingly and said, ‘You lose.‘

Joke #7: Husband’s losing rent money
‘That bastard husband of mine wanted me to sleep with the landlord because he lost the rent money playing poker,’ the housewife told a neighbor.

‘I have to admit I did — though with certain misgivings, I might add. What I haven’t done, though, is tell my husband the rent is paid up for six months!’

The milkman walks up to number 36, and as he passes the window he looks in and sees a group of young boys drinking bourbon and playing poker for what looks like huge stakes.

The milkman asks, ‘Are your parents in?‘

The boy replies, “WHAT DO YOU [email protected]%*NG THINK?”

Did ya hear about the blonde who brought a bag of frozen?

french fries to a poker game?

Someone told her to bring her own chips.

What do vampires play poker for?