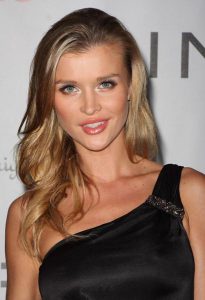 Joanna Krupa is one of PokerHarder UK’s favourite babes.  Born in Warsaw, Poland in 1079 Joanna now lives in LA with her mother.  Living with her mother has kept her down to earth and she hasn’t let the Hollywood super model life style get to her head.

Joanna Krupa is often declared Sexiest woman in the world by many magazine and we can see why!

Joanna first got into poker when she appeared on the cover of Trump World and they put together a million dollar poker tournament for charity.  Joanna and the rest of The Apprentice cast members and everyone involved in the magazine entered.

This was her very first live poker tournament and she went on to win it!  She later said in an interview that she had lots of beginners luck and played very ‘tight’.

A short time after her win in 2006 Titan Poker asked Joanna to be their spokesperson.  They thought this was a much more interesting idea that some old poker pro.  Titan were right, it isn’t easy to overlook pictures with Joanna Krupa in them.

Joanna started playing a lot of online poker at Titan and she used this as the perfect forum to improve her poker skills.

Just a year later Joanna Krupa entered the World Series of Poker main event and did extremely well to outlast more than five thousand players and cash in the money for the second time in a row during a live poker tournament.

In 2005 Joanna Krupa made many readers happy when she did a nude photo shoot for Playboy magazine.  As well as her Playboy shoot, Joanna also did naked advertising posters for three PETA (an animal rights charity) campaigns.

We hope to see more of Joanna Krupa and wish her all the luck at the tables.  If you want to find out more about Joanna Krupa you can visit her her official website or follow her on twitter.