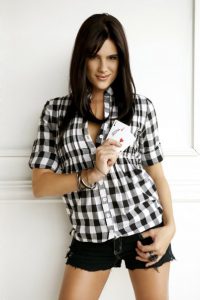 Controversial poker babes Tiffany Michelle became famous within the poker community when she finished 17th in the 2008 World Series of Poker main event.  She was the last women standing in the tournament and won $334,534.  Here comes the controversial part…

A year earlier (2007) Tiffany started working as a hostess for the PokerNews website, hosting their online videos and interviewing players.  Whilst the 2008 WSOP was taking place Tiffany was still working for PokerNews and agreed a deal with ‘The Bad Boy of Poker’ Tony G (owner of PokerNews) and Jeffrey Lisandro that she would play the $10,000 buy in main event for them.  They would pay her buy in and she would wear PokerNews badges and get 20% of any winnings.

All was going well, Tiffany Michelle was playing the main event, wearing her PokerNews badges and playing well.  Later in the tournament though as Tiffany started doing well, she appeared wearing ‘Ultimate Bet’ logo’s (a good example of a poorly managed online poker room).  This in turn upset Tony G and PokerNews combined.

Tony G then issued an official reaction in his own personal poker blog.  This was part of it:

“I really love the girl and she is a star to me, and a great entertainer but not qualified enough as a skilled poker player that I would stake in the main event and if I were to do that, her value would be 80/20 and I know that if she places, she is going to get a huge deal but before she’s proven herself, no one would want to touch her with that big of an investment on unproven ground.”

But…there is more to Tiffany Michelle than just that, Tiffany was homeschooled as a child and co wrote a Christian book with her mum called Scriptures at your fingertips for Teens.  She decided not to take part in the 2009 World Series of Poker because she was taking part in an American show called The Amazing Race – coincidence?

Unfortunately Tiffany decided to say no to PlayBoy when they offered her the chance to appear in their men’s magazine.  She still has some hot pictures though as you can see in our Tiffany Michelle gallery.

You can see updates from Tiffany Michelle on her Twitter page of on her official website.  You can also track her tournament winnings on the Hendon Mob Website.