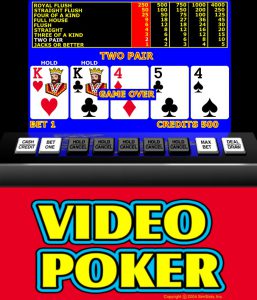 Video Poker, unlike its live counterpart, is not actually played against human opponents but instead agaisnt the house (with fixed odds for hands set by the casino) on machines similar in design to fruit-machines.  The game is essentially five card draw.  Players receive 5 hole cards and are then allowed to exchange and redraw (normally once).  Video Poker is coin operated (although most machines have now been helpfully updated to take notes and even cards), the player inserts money and is then credited the amount, pressing deal starts the game.

The player receives his 5 digital cards then he can exchange based on the strength of the hand dealt.  If the player is dealt a natural he can stand pat if he has already made a premium hand and collect his winnings.  If the player needs to redraw to improve their Poker hand they can exchange as many of their starting cards as they require to try and make the best possible hand.  Often on these machines there is a set minimum hand required to be paid, in most common forms of video poker this would be jacks or better meaning the player must have at least a pair of jacks to win.  The highest payout possible comes as with most forms of poker in a Royal Flush (the highest 5 card combination in poker).  These machines were most popular in the 1970’s, with computers becoming affordable it finally became economically viable to produce computers with screens able to provide all the options and cards required to recreate the poker experience.  These machines actually gave people a great in to poker as they got to learn the fundamentals without the intimidating atmosphere of a live poker environment.

Poker slot machines are still found in casinos across the globe and offer a vast array of different variations.  Here is a breakdown of some of the most popular:

All American: It’s very similar to the Jacks or Better game, but has an increased payout for flushes, straights and straight flushes and a reduced payout for full houses and two pairs.

Deuces Wild: In this version of video poker all the two’s are wild and can represent any card out of the deck (which hasn’t been dealt yet). This makes it much easier to make a high five card combination (four of a kinds appear on average once every 15 hands) and therefore reduces the payouts when compared with Jacks or Better.
Progressive Jackpot: Usually multiple progressive jackpot machines are linked with each other and generate money for the jackpot from every single hand played by anyone (on any of the linked machines). Over time this can create huge jackpots that lure many players to the machines in hopes of hitting the big one. Sometimes a jackpot can become high enough that in the long run it becomes profitable to play (although the variance would be very big).

If you were hoping to play some video poker on PokerStars, you’re going to be out of luck, as it’s an online card room specialising in poker and not a casino. There is however some video poker apps you can play on your phone or Pc.  Just try a quick Google search for video pokerapp and you should have plenty of options.