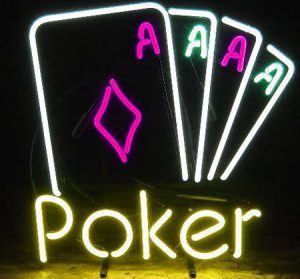 Before the rise in popularity of Texas Hold’em Draw poker was probably the most played poker games.  Draw poker is mostly likely the game that you see when you see cowboys playing poker in old western movies; if the actors are holding five cards in their hands you can be pretty sure it was five card draw poker.

When a player receives a whole poker hand and he then has the option to trade in cards, swapping them for ones from the deck before betting, the game is considered a version of draw poker.  The name comes from the very action of ‘draw’ing cards from the deck to swap.

Draw poker is often taught to new poker player as it is one of the more simple games to pick up and can be played by 2-8 players at a time (although most games are played with 5 players).  It is highly likely that if you’ve ever played poker with friends or family in the past that they played draw poker with you, despite this you can barely find a casino in the world that offer draw poker games these days because of the rise of Texas Hold’em and stud games.

There are many variations of Draw poker, here are some of them:

Five card draw, triple draw and Badugi can be played on the PokerStars network for either play or real money.  If you want to try one of these games you can do so online in a safe and fun environment.

For a funny example of Hollywood’s view on draw poker, have a look at this clip with Mel Gibson from the movie Maverick: