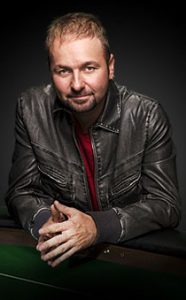 Well known television face and member of Team PokerStars Pro, Daniel Negreanu was born of Romanian roots but was actually born in Canada.  His parents both emigrated in the 60’s and Daniel arrived shortly afterwards!  Negreanu quickly came to the conclusion as a teenager that he wanted to pursue life as a professional gambler.  Spending many hours in snooker halls he learned the finer points of how to play poker.  This was long before there was any internet poker so trying to learn poker meant seeking out small often hidden back-room games around town.

By the age of 22 Daniel had managed to build up a sizeable poker bankroll, he packed his bags and took a flight to Las Vegas hoping to become a full time poker professional. Unfortunately he wasn’t ready for his first round with the sharks and Vegas got the better of him.  Heading back home completely broke he had just one thing on his mind, rebuild his bankroll and try again.  Not long afterwards following some notable tournament wins at the Foxwoods casino, Daniel was ready to head back to the bright lights of Las Vegas.

The first time Negreanu cashed in a WSOP event in 1998 was when he took down the first place spot and his first ever WSOP bracelet.  Winning his event, the $2,000 Omaha poker tournament earned him a sizeable cash of $169,460, which he sensibly added to his ever growing bankroll.

2004 was a fantastic year for this now well recognised member of the poker community, he was named WSOP player of the year and in addition Card Player of the year.  Since then Negreanu has collected another 4 WSOP bracelets making quite the collection, he has sat at over 23 WSOP final tables (2 from the WSOP Europe) and cashed in another 47 money cashes. Looking at his WSOP winnings alone Negreanu has made over $3.5 million.

Currently (although ever fluctuating) he is sitting second behind Phil Ivey in the all time money list with over $12.5 million in (tournamnent) winnings, Negreanu’s talent doesn’t stop at tournaments however, he is also a regular player in the biggest cash games in the world.  He can often be found at Bobby’s room in the Bellagio, one of the most notorious poker rooms in Las Vegas inhabited by only the best players in the world and millionaires willing to pay just for the experience.  Blinds start at $4,000/$8,000 and are often raised higher.

When not at the big live games Negreanu is usually a regular on some of the biggest poker shows on television.  He has featured on High Stakes Poker (search on YouTube for some of the best poker clips to be found online or check out our videos section!), Late Night Poker, and Poker After Dark.  Daniel has thus far been unable to demonstrate what he is capable of on High Stakes Poker losing money on all 6 seasons of the show.