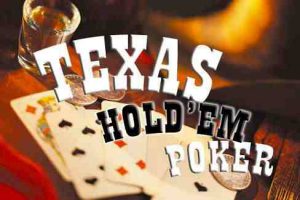 Texas Hold’em poker was a dying game until the innovation of tiny tv cameras (called “poker cams”) and a hit Blockbuster movie revitalized the game and the gambling world as a whole.  In 2000 we saw the meteoric rise of Holdem and the old time favourites such as 7 card stud, and 5 card draw fall to the wayside.  With a wave of new literature and the internet poker boom in its  wake, millions take to the virtual felt these days to begin their run at the gold, and suffice it to say Texas Hold’em poker won’t ever die quietly again.

In Texas Hold’em the goal of all everyone playing is to win the money in the middle (called the pot) by either having the hand with  the highest value at the end of the betting rounds, or to bet and have nobody call your wager.    Because you only know your own holdings it becomes a game of informed decisions with missing information.  The key to winning in poker is to try to put your opponent on a hand and influence their decisions with your betting, getting them to either call your bets when you have the best hand, or getting them to fold their cards when you do not.

Robtown, Texas is known as the birthplace of Texas Hold’em poker but little information is truely known about its origin.  After its invention in the early 1900’s Texas Hold’em spread like wild fires throughout Texas and was brought to the Vegas casinos by a group of road gamblers lead by Doyle Brunson.  Amarillio Slim, Roscoe Weiser, Crandell Addington and Sailor Jerry teamed up with the Godfather of poker and revolutionized the strategy behind the game. ‘They didn’t call it Texas hold ’em at the time, they just called it hold ’em.… I thought then that if it were to catch on, it would become the game. Draw poker, you bet only twice; hold ’em, you bet four times. That meant you could play strategically. This was more of a thinking man’s game.‘

The Texas Holdem rules are said to take 5 minutes to learn and a lifetime to master, and if you would like to see the movie that sparked it all, Check out Matt Damon and Edward Norton in John Dahl’s 1998 film Rounders.