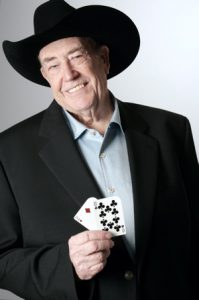 Everybody who knows anything about poker has at least heard the name Doyle Brunson at some point, most of us think of him as a notorious poker legend.  Brunson has been playing the game for over 50 years, way before it became so popular, Doyle is one of the originals and most certainly one of the best.

Starting his poker life playing in illegal underground poker games on Exchange Street in Texas with his friend and fellow player Dwayne Hamilton, they got bitten by the thrill of the game and started to travel much further afield to take part in the biggest games around.

On their travels they met poker legends Amarillo Slim and Sailer Robert with whom they formed close friendships.  Eventually they settled in Las Vegas and Doyle Brunson started to play in the World Series of Poker after helping to create it in 1970 and Brunson has played nearly every WSOP main event since.

Brunson proved his knack for the game in the early stages of his career and has carried on doing so ever since, Doyle himself will tell you that even he after all these years still learns new things about poker all the time.  He should know considering he was the first person ever to win the World Championship of Poker back to back and has won 10 WSOP bracelets and accrued himself nearly $3 million just in WSOP cashes.

Only famous pro player Johnny Chan has matched Brunson’s record of 10 bracelets and the only person to hold more WSOP bracelets in the world is Phil Hellmuth who is holding the record with 11 bracelets.

Doyle Brunson was also the first player in the world to officially earn over $1 million in tournament winnings and was the first player to ever win a World Series of Poker Main event as well as a World Poker Tour Event.

Being so well respected within the poker community Doyle went on to release a book in 1978, that book was called Super System and has since become known as ‘the bible of poker’ which went on to be made even more famous by the Matt Damon movie about poker called Rounders.

There we no other books like Doyle’s Super System published at the time but if you think that is the only reason is was so popular you’d be wrong as Super System still to this day sells around 14 thousand copies a month and is a much loved and very well respected poker manual which holds within its pages, invaluable strategies surrounding not just Texas Hold’em but many different types of poker.

Doyle Brunson doesn’t look to be retiring from the game anytime soon and at 77 he is still going strong and can be found regularly playing the biggest poker games around the world including the infamous $4k/$8k mixed games in ‘Bobby’s Room’ at the Bellagio.  You can also regularly spot Brunson on TV playing in events such as High Stakes Poker, Poker After Dark and the World Poker Tour.

If you want to follow what the poker legend that is Doyle ‘Texas Dolly’ Brunson is up to you can via his twitter feed as well and his official website and to top it all off Doyle writes an enthralling poker blog which we have reviewed here on PokerHarder UK.