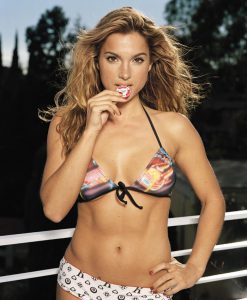 Shana Hiatt was well known for her beauty and gorgeous personality long before she came into the world of poker.  In 1995, Shana Hiatt was voted Miss Hawaiian Tropic USA, she also posed naked for Playboy magazine that same year.

Shana was first introduced to poker when she was presenting the World Poker tour.  She fast became known as ‘The Goddess of Poker’.  Shana was married to James Van Patten the brother of Vince Van Patten who was the co host of the WPT TV show, the marriage though unfortunately didn’t last and they were divorced.

Not giving up on love though Shana Hiatt re married in 2005 to movie producer Todd Garner.  Later that year controversy struck when Hiatt left the WPT TV show and sued the producers of the show, she had to get a restraining order to stop the WPT from forbidding her to work or other poker shows like Poker After Dark.  WPT said that Hiatt had signed a non competition clause in her original contract but Shana claimed she hadn’t.

She then signed with NBC and started as a hostess of the Poker After Dark show and the National Heads-Up Poker Championship until she was replaced in 2008 by Marianela Pereyra when she had to leave the show due to her pregnancy.

Shana may not have started off loving poker but nowadays she certainly does, presenting so many poker shows and seeing all the top poker players seems to have given her the poker bug, now Shana can often be found playing online poker and sometimes can even be spotted at live poker events.

Shana Hiatt is widely considered as the first poker babes in the world and with all her experience in presenting, hosting and playing poker we’re sure you can see why we picked her as one of PokerHarder UK’s faveourite poker babes.

Below is a fun video of some of Shana’s hosting highlights: