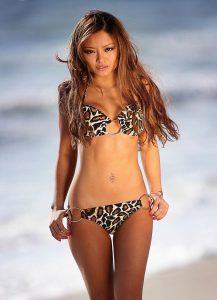 Tila Tequila Nguyen is one of the most famous world wide of all our poker babes.  With over 2 million myspace friends it’s safe to say everyone loves Tila Tequila.

Tila Tequila used to have her own reality TV show which was aired on MTV and called A shot at love, she has also recorded several music albums herself as well as appearing on numerous magazine covers and to top it all off Tila Tequila has her own online poker room!  We can see why she calls herself ‘The Baddest Bitch on the Block’.

Her forever-a-punk-and-rebel and do-it-yourself attitudes have kept Tila fighting for success, spotting the signs of a boom in the online poker world early Tila Tequila quickly opened her own poker room called tilatequila.com.  Tilatequila.com is made in partnership with PlayTech Software who with iPoker make up a large network of online poker rooms.  Which is aimed at us Europeans being as it isn’t open to US customers.

In all honesty we at PokerHarder UK will probably never use those sites due to stoneage software, crappy promotions and not enough money in their guaranteed tournaments.  But we still love her for her never give up and always work hard attitudes…oh yeah and the fact that she is one of the hottest babes around!

We at PokerHarder UK are rooting for Tila Tequila to win a WSOP tournament bracelet, this has a lot to do with the fact that we would love to see the picture of her on the covers of poker magazines wearing just her WSOP winners bracelet.

You can keep up to date with what Tila Tequila is doing and if she has won that bracelet by keeping an eye on her infamous myspace page.  But for now we know these pictures will help you understand why we think she is amazing.